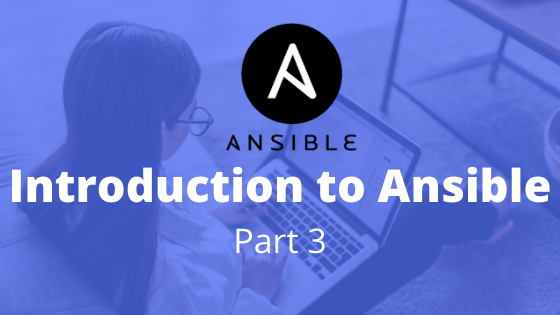 In this part, we will focus on what Ansible Ad-hoc commands are and we will introduce a few basic commands so make sure to have your 3 servers up and running and be able to follow along!

There are two ways of running Ansible commands:

The Ad-hoc commands are just like single bash command that we want to execute.

Playbooks on the other side are like scripts and can target different node groups.

To run Ansible Ad-hoc commands you can just use the ansible command and then specify a host and the command that you want to run.

For example, if you want to check the disk space on a specific remote server you could run:

The output that you would get would look something like this: 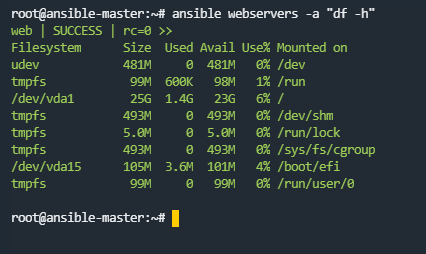 You can find a link to the official Ansible ad-hoc documentation here:

You can also run modules. This is almost the same but we use -m flag rather than the -a flag for an action, for example: 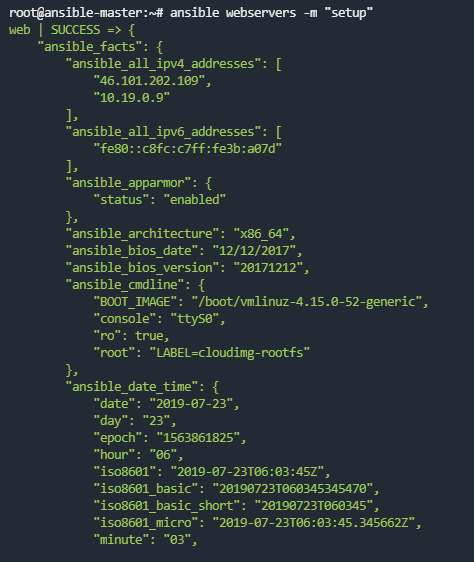 What the Ansible setup module does is it hooks up with the host and shows us all of the information that Ansible master has about the host.

As you can see this returns a lot of information that can be used in countless different ways.

This pings our host and that way we can test the connectivity to the host from the master server and make sure that it actually works.

We can also install some packages on our hosts using Ansible ad-hoc commands.

For example, let's say that we wanted to install Apache on our webserver, what we would need to do is just run the following command:

Rundown of the command:

-m - specifies the module that we want to use

-a - specifies the flags, in our case we specify that we want to install the latest apache2 version

We could also start the service with the Ansible service module:

Once you've read this post, make sure to test your knowledge with this Ansible Ad-hoc commands Quiz:

That's pretty much it for part 3! Now you know what Ansible ad-hoc commands and how to run them! You even installed Apache on your webserver using Ansible!

In part 4 we will cover the actual power of Ansible with the Ansible Playbooks!

Feel free to reach out to me in case you have any questions!