The top 10 Linux Commands that Every Data Engineer Should Know 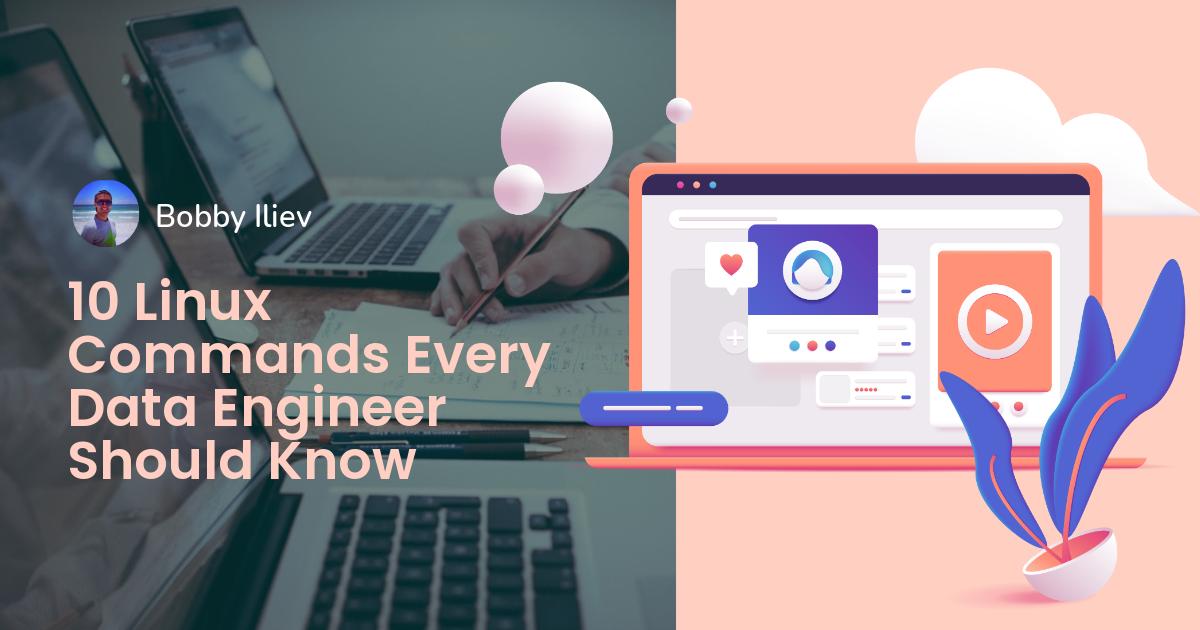 No matter if you are a data analyst or a system administrator when working with unstructured files in Linux there are a set of commands that would help you a lot in your daily tasks.

In this tutorial, you will learn the basics of the following commands and how to combine them using a pipe (|) and analyze some raw data files.

The list of the commands that we will go over are:

This is going to be an interactive tutorial, so feel free to use the Linux shell down below to run the commands from this tutorial directly here in your browser!

Here is a very simple example file that I will be using to go over each of the commands:

Copy the text above and by using your favorite text editor create a new file:

Then paste the text and save the file.

With the demo data in place, let's go ahead and learn some of the most important commands that you should know in order to analyze the data!

The cat command is used to print out the content of the file directly on your screen.

In our case, as the file name is demo.txt we would run the following command:

This is very useful when you do not know what's in the file and want to quickly take a quick glance.

The head and tail command

The cat command is great as you can get the content of a file without opening it with an actual editor.

However in some cases, if the file is huge, it might take a while to print out the whole content on your screen. So let's see how we could limit that!

You would use the head command to get the first 10 lines of a particular file.

This would only print the first 10 lines of the file and would be very handy if you were working with a huge file and did not need to see the whole content on your screen.

You can also add the -n flag followed by the number of lines that you wanted to get in order to override the default behavior of only printing out 10 lines. Example:

The above would only print out the first 5 lines of the file.

You could actually exclude the -n flag altogether and use a dash followed by the number of lines directly, for example:

The above is going to be the same as tail -n 12 demo.txt.

The tail command has the exact same syntax as the head command and is also used to limit the number of lines that you get on the screen, however rather than getting the first lines of the file, using the tail command, you would get the last lines instead.

For example, if you wanted to get the last 2 lines of a specific file, you would use the following command:

Just as with head, if you don't specify a number tail would default to 10.

Another very useful flag for the tail command is the -f flag.

It is useful very handy as it will print out the last 10 lines of the file and then wait for new content to be added to the file and print it out on your screen in real-time. This is very useful when monitoring your server logs:

The pipe (|) is probably one of the most powerful commands out there. The pipe lets you redirect the output of one command to another command. This allows you to chain multiple commands together and manipulate/analyze so that you could get the exact output that you need.

For example, both head and tail can be combined with the cat command using a pipe, |:

In the example above, we would redirect the output of the cat command and pass it to the head -2 command.

The wc command stands for Word Count and it does exactly that, it counts the lines, words, and characters in a text file.

Here is a quick rundown of the output:

There are some handy flags that you could use in order to get one of those 3 feeds:

The grep command is probably my favorite one, you can use it to search for a specific string in a file. Let's say that you wanted to get all of the lines that include the string bobby in them. To do so you would use the following command:

By default, the grep command is case sensitive, so if you were to search for the string bOBbY you would not get any results back:

However, there is a handy flag that you could use in order to make the grep command case insensitive:

By default, grep would match all string references:

To only match whole words, you can use the -w flag:

The above, would not match the tony and tom words.

AWK is actually not just a command but a whole scripting language. It is used for text processing. For the scope of this post, we are only going to scratch the surface of awk.

The awk command lets you print out specific columns. By default, the delimiter that awk uses is a space or a tab.

So if we wanted to print out only the name column, we would use the following:

You could print multiple columns as well:

You could also specify a different delimiter based on your data file by using the -F flag.

The sort command lets you sort your file in a particular order. By default, sort would expect ASCII content and would sort the content alphabetically.

To sort the users alphabetically, you could just use the following:

Let's combine this with awk and sort the users by orders:

To sort the items in reverse order, you could add the -r flag:

A very handy flag is the -h flag, which lets you sort by human-readable numbers which includes comparing numbers in GB, KB and etc.

As the name suggests, the uniq command, lets you filter out and only show the uniq line records. In most cases, you would use the uniq command together with the sort command, as uniq only filters out identical lines that are right after each other.

I intentionally created the file so that there are some duplicate lines. Let's filter them out by using the uniq command:

By adding the -c flag, you would also get a count of how many times each line repeats in the file:

The sed command let's you do a search and replace for a specific string in a text or a file. SED stands for stream editor.

Let's go ahead and use the grep command to find all of the references for devdojo in the file:

Then let's go and use sed to change the devdojo username to something else, like thedevdojo for example:

Let's have another example and change all of the references of the small latter b to a capital case B:

Let's have a quick rundown of the sed command:

You could also the sed command to implement the changes directly to the file by using the -i flag:

This would change the file and update all of the references for devdojo to thedevdojo. You would not get any output back.

Note that this process is irreversible, so if you are changing an important file, make sure to take a backup first!

The tr command is used to change or delete characters. For example, you could use tr to change all lower case characters to upper case:

Let's also change the tab character to a command:

This is quite handy when you want to change the formatting of a specific file.

The above shell commands are very handy to ad-hoc analyze a specific file. However, if you want to take this to the next level and be able to use SQL to actually analyze a dynamically changing file source, I would recommend taking a look at Materialize.

Materialize is a streaming database for real-time analytics.

It is not a substitution for your transaction database, instead, it accepts input data from a variety of sources like:

And it lets you write standard SQL queries (called materialized views) that are kept up-to-date instead of returning a static set of results from one point in time.

To see the full power of Materialize, make sure to check out this demo from their official documentation here:

As a next step I would recommend testing out the commands that you've just learned with different data files that you have in place!

I would also recommend taking a look at this script there that I've created to parse Nginx/Apache access logs which includes the majority of the commands that we've used in this tutorial:

BASH Script to Summarize Your NGINX and Apache Access Logs

If you want to learn more about Bash scripting, make sure to check out this free ebook here:

If you have tried out Materialize, make sure to star the project on GitHub:

I hope that you've found this tutorial helpful!